After being fairly disappointed by fitness bands and their lack of features, I had recently decided to step up to an Apple Watch.

I’ve had a couple of different Fitbit bands (the Flex and the Force), a Xiaomi Mi Band, a Garmin VivoSmart and most recently a Pebble Time. The Fitbits and Mi Band were primarily fitness and sleep trackers. The VivoSmart added more information on the display as well as including notification alerts (the actual display left much to be desired)… and the Pebble Time was a another step up – adding yet a larger display and downloadable apps into the mix.

First let me say, one of the most important features to me with a smartwatch is the ability to receive vibration notifications when I receive emails, texts, and calls on my iPhone – especially at night when I’m sleeping as I don’t always hear my phone without cranking up the volume. Being in the IT industry that provides 24×7 support, automated alerts is a way of life – it shouldn’t need to impact my wife’s sleep though.

The Pebble Time did a great job for notifications – the vibration was nice and strong, the battery life was also very good for a smart watch (around 7 days). I wasn’t a big fan of the buttons on the sides as they were a little stiff, but also felt a little on the cheap side. While I liked the watch face overall – the bezel is quite large, reducing the usable size of the display.. and the casing is also very thick – it doesn’t fit under most of my dress shirt cuffs. This was probably my biggest issue with the Pebble.

Well, it just so happened that the Apple Watch had a $100 price drop, so I decided to give it a shot – I went with a 42mm Sport in space gray. I’ve always been impressed with Apple’s packaging, attention to detail, and style – Apple sets the bar pretty high. While I do like the beautiful display of the Apple Watch, the case just seems too bulky – especially considering the limited battery life. 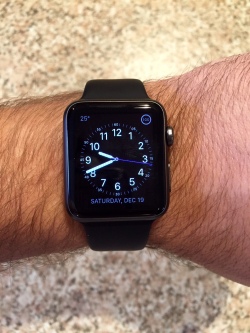 Side view of Apple Watch

Thickness Comparison: iPhone 6 Plus with a case is thinner than the Apple Watch

While I’m only somewhat disappointed in the battery life, the haptic vibration is a bigger disappointment. Even with the haptic strength set to the max level and the “Prominent Haptic” enabled, it isn’t nearly as noticeable as the Pebble. Definitely not enough to wake me up in the middle of the night. I also find the controls to be a bit on the non-intuitive side, I’m sure as with most things, over time you get used to it. It just doesn’t seem to have the same intuitiveness as other Apple products.

While I do like the added application features and integration with the iPhone, they’re just not enough for me to keep the Apple Watch on my wrist. Maybe the 2nd generation Apple Watch will resolve most of these issues and I’ll give it another go…but as for now, I’m bare-wristed once again.